Lego has unveiled a UCS version of the Tumbler from the Dark Knight movie which will be on display at the San Diego Comic-Con. The set will consist of about 1869 pieces and will ship in September for $199 USD (Euro price not yet available). The tumbler features a full interior and a nameplate with Batman and Joker (first time Heath Ledger version) minifigs. 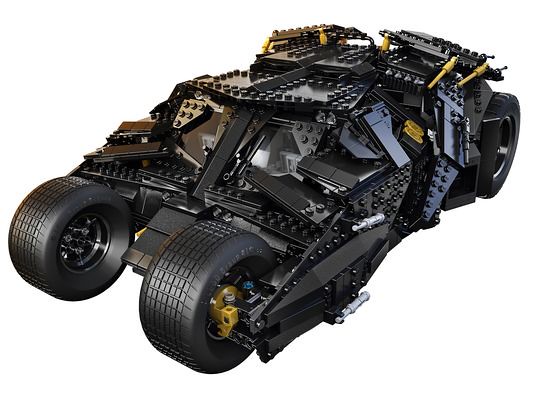 Remarkably, this set will be also very interesting for Technic fans, because it features new tyres on the front wheels, which have a bulgy desing and a thread style racing pattern. And in the back we have 4 “Unimog” wheels. END_OF_DOCUMENT_TOKEN_TO_BE_REPLACED

When I first saw this picture, I thought it was simply a nice render of an Imperial Star Destroyer. But going through the other pictures quickly revealed a brilliant MOC. This creation is approximately 2 metres long, weighs about 50kg and was made by flickr user Jerac.

Remarkably, he built this with a SNOT technique instead of creating a shell out of plates like in the official Lego model 10030 or its derivates. That not only creates a studfree surface, but also gives it a very clean and smooth look that makes you look twice before you identfy it as Lego. The interior is built with a construction of Technic bricks that creates a very clever skeleton to hold everything together. And as if all this isn’t enough, some lighting has been applied to several areas.

On his flickr stream you can find a lot of interesting WiP pictures and some details about the design process of this monster. Be sure to check it out. This UCS ISD is worth more than just a look or two. Behold the awesomeness and also check out Jerac’s other great MOCs.