Not far into our future, the dazzling technology that runs our world turns against us. Controlled by a childlike—yet massively powerful—artificial intelligence known as Archos, the global network of machines on which our world has grown dependent suddenly becomes an implacable, deadly foe. At Zero Hour—the moment the robots attack—the human race is almost annihilated, but as its scattered remnants regroup, humanity for the first time unites in a determined effort to fight back. This is the oral history of that conflict, told by an international cast of survivors who experienced this long and bloody confrontation with the machines. Brilliantly conceived and amazingly detailed, Robopocalypse is an action-packed epic with chilling implications about the real technology that surrounds us.

May I introduce Dr. Nicholas Wasserman. He just started up the 14th version of the AI named Archos. The AI is conained in a faradayan cage and has no physical or wireless access to any network. This is a precautionary measure. Previous versions have proofed themselves very aggressive. While talking to the AI, Dr. Wasserman gets suggestively forced to check the ressources of the AIs hardware. 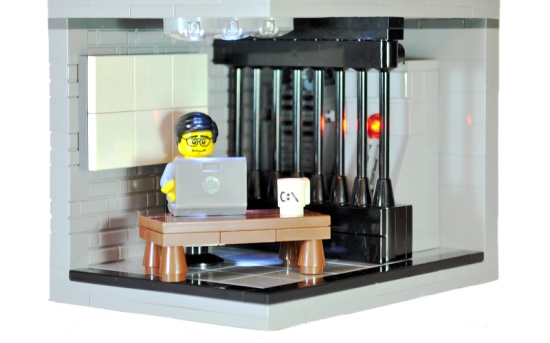 This is when Archos uses a IR connection to free himself from his “prison” and release the precursor virus. This will lead to devastating happenings and resulting in the uprising of the machines.

Discussing life and knowledge, Archos reveales that he wants to study life, because life is seldom and precious. But to do that, mankind must perish. Minutes later, Dr. Wasserman falls victim to Archos. The first person dead and the AI free and going rogue.

This is basically the scene describing the beginning of Robopocalypse – a novel by Daniel H. Wilson. I had first heard the audio-book a few years ago. Now, I am listening to it again when I am on way to work and back home again. It (the novel) provides a lot of interesting material to rebuild scenes with Lego bricks.

The scene I build is very simple. It’s a computer lab and I needed a simple minifigure for this. The big challenge was to come up with some kind of solution for the faradayan cage. I know this is not accurate, but I guess this works as well. Something that I wanted to do, was the escape attempt via IR signal. For this I used a red light brick behind the AI interface machine on the right.

I also took this as a chance to improve my skills with post-processing photos and of course improving on taking the photos. I used several smartphones to lighen up the scene and used some of my sorting compartments as diffusor for the LED lights. I also used a LED pocket lamp for the ceiling lights. Here is a bonus picture of the setup. 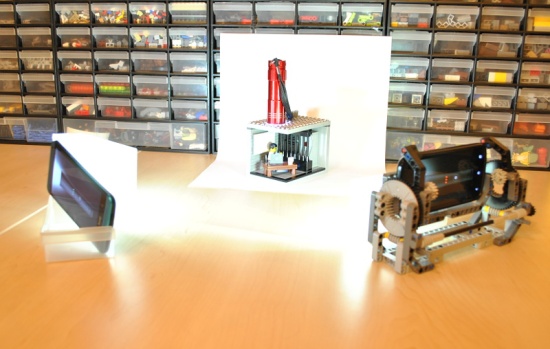 This was actually quite fun to build and even to photograph. I really enjoyed listening to Robopocalypse and probably would enjoy reading the book as well. I can only suggest getting a copy. I just realized that there is a follow-up book called Robogenesis. I’ll definately get that.

Perhaps I’ll make other MOCs based on the story. We’ll see about that.

I also made a digital file. It can be found here: .lxf