This just gave me a good laugh. But watch yourselves!

The Hobbit in 72 Seconds

Once again a fantastic video from Brotherhood Workshop.

The whole Hobbit story in 72 seconds and of course made from Lego.

If you haven’t read the book, this might contain spoilers!

Light up the evil fortress

Now who would I (Balrog) be if I didn’t post THIS! 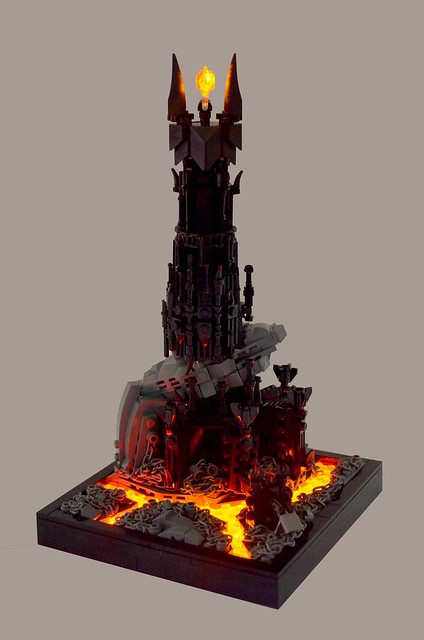 This micro-scale Barad-dûr sports a lot of detail for the scale. Ian Spacek really outdid himself with this one. And the best: The lit up eye of Sauron and the glowing lava really gives this creation the right atmosphere.

What am I building?

I was a little busy yesterday and today. And will be probably tomorrow as well. I am currently building a digital model of a certain Technic car. Actually, it is not my own MOC. It is by someone else and I am dreading for a long time now to build something similar. I was hoping for a digital model or even instructions from its creator, but until today nothing has happened.

The person who originally created this model is not staff from TLG, but he achieved to be somewhat famous among the Technic fans. I think the car is pretty cool and huge and has some great functions. A real supercar. That is why it is so interesting to me. I build the digital model to find out if I can build it with my collection or if I need some substantial parts orders. As source material I have the “release” pictures of the model (which contain some pretty good and stylish photography) and some WiP pictures. The big problem is, that I need to build the chassis mainly from the WiP pics, but the finished model is a little different at a lot of areas. Also, I am doing some “color polishing” to improve some sections myself directly. So the big question remains: What am I building?

A hint: This is the rear axle.

Who can guess from who and which model this is?

The chores of the brick

After I have done this, I have procrastinated a little to write this post. Not because I didn’t want to write this, but the so-called chores I did, really got me down a little. So “chores” is usually something you do around the house, do regularly or that is a nuisant duty. In this case, it’s the latter. But that is also my own fault, since I decided myself to keep my loose parts properly sorted instead of having a big box with all my parts like I had it when I was a kid.

What I am ranting about, is sorting away pieces. Often, it is not too much work. For example when I disassemble a system set. But after disassembling Sheepo’s Shelby GT500, I was confronted with a  rather big box full of parts. Over 3500 parts!

Usually, when I disassemble something, I try to pre-sort the pieces directly. Liftarms, thin liftarms, bricks, connectors, axles, pins, gears, bushes, panels and special parts from suspension, fake engine and so on. This time, I only had a box, because I had none of my other boxes available. So I used the box I received with my last order from Lego (which I got the Exo Suit in) and put all the pieces in there. After 4 hours of disassembly the box was 2/3 full as you can see above.

So, before finally putting the pieces into the storage I usually do some pre-sorting. Double the work, but there was no other way. So here is how I do that to keep the time effort as low as possible. The procedure is divided in several steps that are repeated until the box is empty:

The type of piece you choose is not necessarily in the mentioned order and there are more than just the three mentioned types. But, you should stick to the type as long as you can easily find pieces of the type. Then go on to the next type and again and again and again. At least that is how I do it. Mostly I leave out pins for quite a few steps until I mostly see pins.

Here you can see how I do it. I still have a third of the pieces to sort. At that moment I was sorting out thin liftarms as you can probably assume from the small container that I placed on the edge of the box. At this stage, normal thick liftarms that were in my way were directly put into the other big cardboard box. That keeps a little dynamic in the process and liftarms are especially easy to sort out as well. Therefore I usually take liftarms in the first sorting step. After that liftarms are sorted out “by the way”.

Here is a close-up picture of the box. I would now change the type of piece to sort out, since no thin liftarms are visible at a quick look. I could choose between axles, connectors or pins. I think I chose axles as the are somewhat more prominent than the connectors and pins being a plain nuisance. More than that, I just sorted out other pieces from the box until only pins were left. And in the end, I had this:

The big box in the background is filled with liftarms, the few panels and the bricks. Left of that are the connectors. In the row in front of the cardboard box we have (left to right) suspension, steering and fake engine parts, then bushes and flex axles, gears, pins and then axles. In front of that two boxes with thin liftarms.

At this stage I could easily detail-sort the pieces and put them in the storage containers with similar parts.

Now the big question: How do you guys handle MOC disassembly? Do you do something similar? Do you have a process that is totally different? Please let me know in the comments.

Posted in My story

The Lego Design Team has published a new video about the design process of the 42030 Volvo L350F Wheel Loader. This is a interesting video that shows some of the process, but still keeps some more detailed facts as a mystery. If you have not already seen it, please see it here:

Also the video has some hidden details, like the poster of the preliminary 42039 24 Hours Race Car and some other of the upcoming models standing around.

New pictures of the box designs for the Technic sets for 1H15 have surfaced.

Well, here is the video where all pictures are shown:

Also, Paul from Australia posted the available pictures on his Blog: Click

Funny fact: A first picture of 42041 has occured as well. That means, that the famous 8041 Racing Truck will hit the shelves once again. This is rather nice, but I am not sure if this set still has the appeal to reach big sales. Apart from the black 5×11 panels, this set was not very outstanding in terms of parts.