Last week on thursday and then on the weekend, I had some time to do some building. I continued to build the Red Coupé Supercar created by Lipko. To be honest, I already finished it on sunday evening. But I want to talk about the building process a little bit instead of presenting the final model (I still need to make some adjustments). 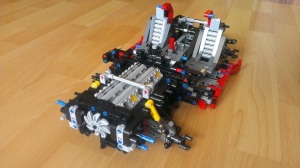 I basically had 5 building sessions:

Building this car was really a lot of fun. Sometimes it was a bit strange and the steps were a little hard to make, but in the end this was a easy and very enjoyable build, thanks to the instructions provided by Therion. In most sections, the build was really straightforward. I had to struggle the most when building the gearbox. The whole gearbox and mounts for the frame could have been made a little less complicated, but the result is very good. Also, it was a bit tedious to wed the rear axle with the gearbox module. And there was something cosmetic that wasn’t easy to do. Setting the steering wheel straight was harder than I though, because of the little space to fiddle around in with your fingers. 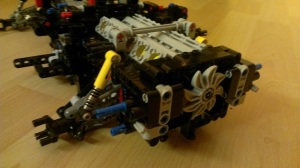 I also found some illegal sections where the build is not according to the LEGO rules of building. The cross-brace for the front suspension touches the motor block a little, but it adds to stability. Also, the rear diffusor is mounted at some angle which results in the perpendicular connector to touch a limiting pin that holds the assembly at a certain height. And the connector for the upper “windshield” is touching the round pin connectors. Though, these techniques used in those spaces are not relying on excessive bending of parts, so every piece should stay in good shape.

On the rear axle the driveshaft consists of a 5.5L axle with stop that connects the 20T gear to the differential. From what it looks like, there should be enough space to fit a 6L axle instead. This would result in the 20T gear sitting properly on the axle, which is currently not. Also, what I would like to have seen, would be a better bracing for the u-joints.

Seeing the model evolve before me was very cool. This car is a lot wider than I expected it to be from pictures. Also, the chasses is very sturdy and only prone to a small amount of flexing. There were some very interesting connection techniques and the end result sure is very impressive.

To finalize this, here are some pictures of the build process.